Request A Quote
Home » Blog » Rowing 101: A Guide to Rowing and Sculling

Rowing 101: A Guide to Rowing and Sculling

A Guide on Rowing and Sculling from EZ dock

What started as a transportation method in ancient Greece, Rome and Egypt, has since turned into one of America’s favorite sports — rowing. Rowing is the first team sport contested in the U.S. and continues to be a popular competitive sport among many schools.

In competitions today, rowers can race solo or in teams of two, four or even eight. Rowing was also the first U.S. sport to have a national governing body. This guide will discuss the basics of rowing, from racing to different types of boats and stroke techniques.

Read the full guide or jump to a specific section:

How Old Is the Sport of Rowing?

Rowing goes back to around 1000 BC, after early humans discovered oars were more efficient than paddles and sliding seats made it easier to exert force against the oar and make the boat go faster. Rowing continued to grow quickly, gaining popularity around the mid-1850s. Boatmen even made a living from the sport, although their names were hardly mentioned at first. They were instead known by their boats. Around the time of the Civil War, however, these men started gaining recognition. People like the Biglin and Ward brothers were distinguished figures, racing for up to $3,000 a race.

In 1896, rowing was inaugurated into the modern Olympics, but bad weather forced officials to cancel the event. The first rowing race for heavyweight men in the Olympics was in 1900, with women’s events added in 1976.

What Are the Categories in Rowing?

When it comes to the open categories, any athlete can join, regardless of weight. For lightweight events, men must not exceed 160 pounds, and the calculated average weight among athletes in one boat must not exceed 155 pounds. In women’s events, women competing in the lightweight category can’t weigh more than 130 pounds, but there’s no average weight for women’s boats.

Events then break down by age. Athletes under 19 years old who won’t be turning 19 in the current calendar year or still attend secondary school falls into the junior category. Next is the under-23 category, and then masters. Traditionally, rowing athletes can reach master status once they turn 27, but many events today offer an updated master’s group where athletes only have to be 21. These masters events usually divide into age subcategories by letter designation, and athletes of all ages are welcome to row in open events.

What to Know About Races

Most U.S. rowing races and international races are 1.25 miles long, or 2,000 meters. This race is known as the sprint race, used in national, collegiate, worlds and Olympic competitions. There are six to eight lanes with every 500-meter section marked with buoys. However, junior races are typically 1,500 meters, and masters are 1,000 meters.

At the beginning of the race, boats line up in assigned lanes while someone in each lane holds the stern of the boat still. An official, often referred to as the aligner, examines each boat to ensure all boats are squarely facing the course and are in even positions at the start.

Crews are allowed one false start in the race but are disqualified if they do it twice. In cases where equipment breaks within the first 100 meters, such as a broken oar, they stop the race and restart it once the crew has repaired equipment. Rowers can leave their lanes during a race without any penalization as long as they aren’t interfering with anyone’s chance to win. Following the sprint race, rowers usually row for another five to ten minutes as a cool down.

In the fall, rowers may also compete in head races, which are 2.5 miles long to three miles long. In this race, boats in each division start separately at 10-second intervals and row along rivers with obstacles like bridges or turns. The winning crew of a head race has the shortest time between the start and finish.

What Are the Types of Boats?

Boats are essential to the sport of rowing. While you may hear them simply referred to as boats, rowing boats are also frequently called shells. They are made from lightweight carbon fiber and reinforced plastic. Since shells are crucial to rowing, many crews will even give their rowing shells names to honor their importance.

Sometimes athletes name their boat in honor of alumni, a coach, a team goal or a mantra. There are two main types of rowing shells — crew boats and sculling boats. There are also different types of boats according to the number of people inside.

When it comes to rowing, there are different boats teams may use:

What Are the Rowing Team Positions? 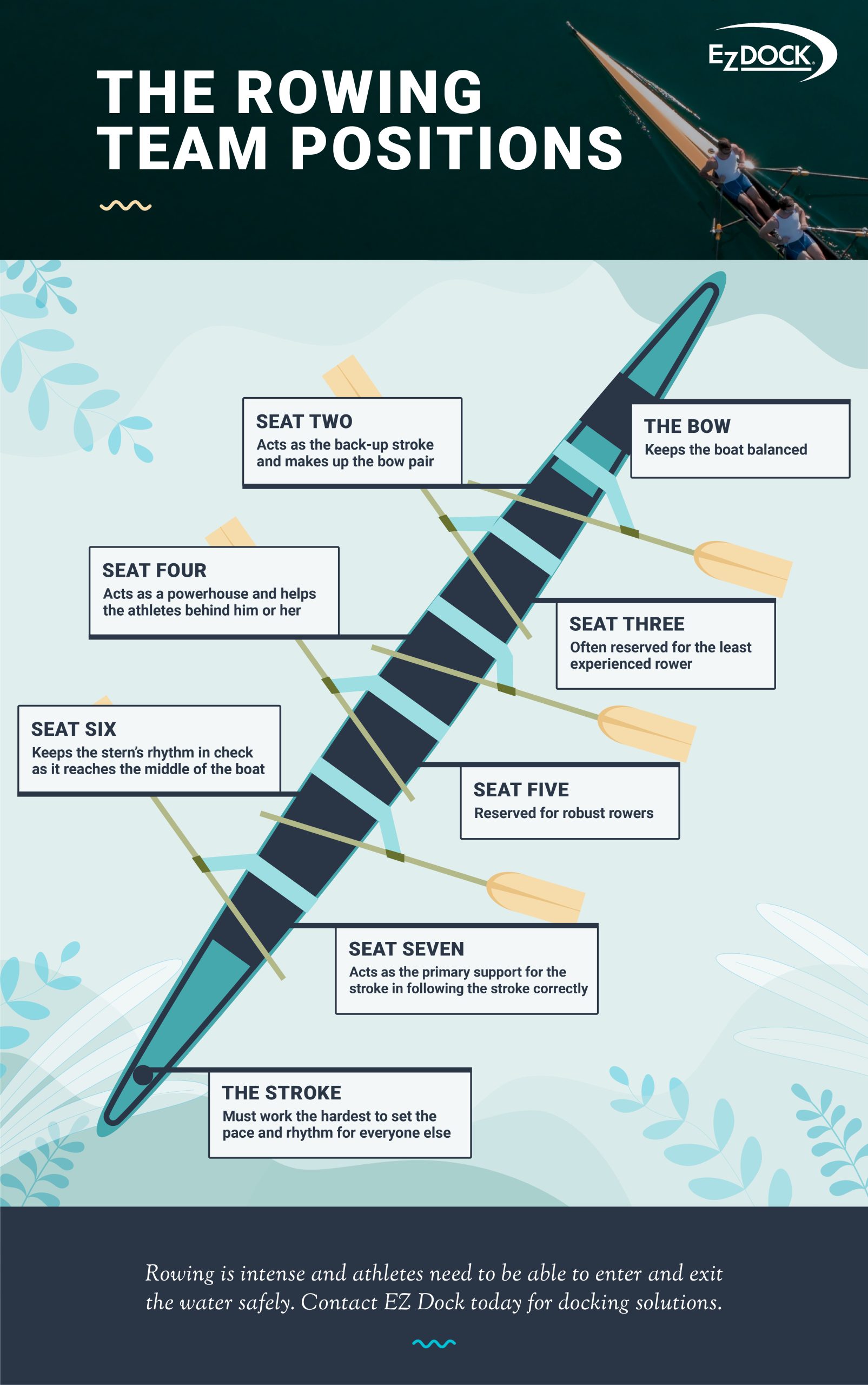 Positioning rowing team members is a systematic process. Each athlete is identified by their seat number in the boat. For example, the person sitting in the bow will cross the finish line first, so that seat is known as the number one seat, or bow seat. The person behind the bow is seat number two, then seat number three and so on until seat number eight, which some refer to as the stroke. Each crew position has a specific function, crucial to the entire boat’s success:

Some boats may also have a coxswain onboard who acts as the eyes and ears of the boat. The coxswain is usually present with teams of four or more, but is not numbered. They’re the head of the boat, generally sitting in the stern, but may also have a lie-down position in the bow end. The coxswain motivates and communicates with the team, leading them in the race. The coxswain also steers the boat and works to get the boat set up correctly before a race. They often use a CoxBox — an electronic amplifier system — to amplify their voice and look at stroke rate and time.

What is the difference between rowing and crew?

Generally, the terms “rowing” and “crew” refer to the same sport. Sometimes schools and colleges in the U.S. will refer to the sport of rowing — where athletes row across a body of water with one oar each — as crew. In nautical terms, “crew” refers to the people who operate a boat, but it’s used in America as another word for the sport. Usually, outside of the academic world, the sport is simply referred to as rowing, such as the United States Rowing Association, for example.

The stroke is an essential part of every rowing race — it can determine who takes the lead and who falls behind. Rowing strokes require athletes to use their entire body to move the boat through the water. While many think strokes are primarily produced from arm strength, much of the stroke actually comes from leg strength.

The act of rowing uses all the major muscle groups, from the arms and legs to the abs and glutes, and requires upper body core strength to power the stroke. Rowers must also have an excellent sense of coordination, balance and flexibility and work together to focus on finding the right stroke rhythm that keeps the crew in sync.

What Are the Types of Strokes in Rowing?

Although the rowing motion shouldn’t have a definite beginning or end, there are four main steps when it comes to the anatomy of a rowing stroke — the catch, the drive, the finish and the recovery:

Shells move fastest at the release point and slowest during the catch. The stroke rate refers to the number of rowing strokes per minute a crew takes. However, higher stroke rates don’t always equate to going faster — talented crews could still cover more water more quickly than an inexperienced crew with a higher stroke rate. Sometimes crews may even yell out a “Power 10,” which signals the crew to give their strongest, hardest ten strokes.

There are two main ways to get across the water — sweep rowing and sculling. While rowing is often the go-to terminology to encompass the sport, rowing often only refers to sweep rowing. Instead of using one oar like they would in sweep rowing, athletes may opt to compete in sculling events where they use two oars — one in each hand.

When it comes to sculling events, there are three main categories. First, there is the single, where only one athlete will compete. Then, there’s the double with two people, and lastly, the quad with four people. Whereas, in sweep rowing, there are racing events only for pairs, quads or eights. Most rowing events at schools and colleges are sweep rowing events, but some might offer sculling to help improve students’ skills.

There is also a difference between sweep rowing and sculling regarding boats. Boats with scullers in them — athletes with two oars each — are referred to as sculls. Although this means all sculls can be considered shells, not all shells can be considered sculls. The single scull is regarded as the smallest boat on the water, as it can be as small as 10 inches across and 27 feet long.

Did you know some physiologists say rowing in a 2,000-meter race requires the same level of work as playing two basketball games back-to-back? Or that astrophysicist Stephen Hawking was a coxswain?

Rowing and the Olympics

Rowing is an intense sport, and athletes need to get out of their boats safely and easily onto a dock after an exhausting race. For stable yet straightforward docking solutions, trust EZ Dock. EZ Dock low profile rowing docks have a low freeboard height, making them accessible for crews of all sizes as they exit their shells, and are ideal for all competitive rowing events.

The modular design allows for easy installation, and since the docks are made of polyethylene, you don’t have to worry about any splintering, painting or rotting. EZ Dock rowing docks use patented flotation technology for enhanced stability and exceed both FISA and USA rowing standards. For your next rowing event, see how EZ Dock can be the perfect docking solution for your crew.

We us cookies to improve your browsing experience! By continuing to use this website, you agree to the terms outlined in our Privacy Policy, and to the receipt of targeted communications through our marketing platforms. We do not sell your personal information, and only obtain personal information with your consent. For more details, please refer to our Privacy Policy.
Yes, I agree
Check out our new EZ Port 280 -- the widest port on the market. Now available for pre-orders! Learn More